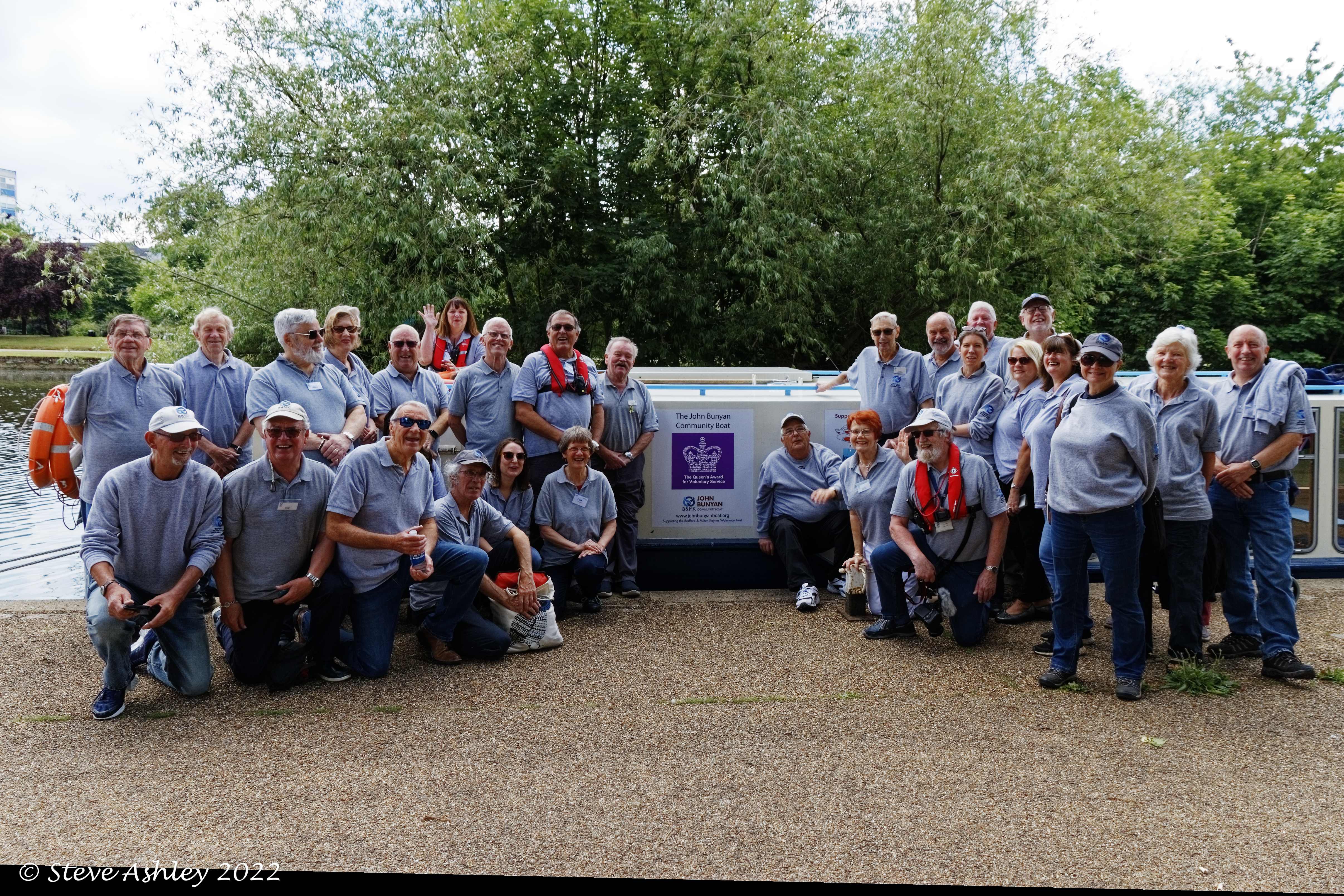 The John Bunyan Community Boat, a completely volunteer based group in Bedford have just been awarded The Queen’s Award for Voluntary Service. This is the highest award a local voluntary group can receive in the UK and is equivalent to an MBE.
The John Bunyan Community Boat, launched in 2013, is run as a Social Enterprise by B&MK Waterway Enterprises Ltd. Funds raised are used to provide public cruises on the River Great Ouse in Bedford at an affordable cost, surplus profits from both special and charter cruises being donated to The Bedford & Milton Keynes Waterway Trust.

The John Bunyan Boat is managed by a committee of volunteers and all the crew give their time voluntarily and are trained in the art of being cabin crew, deck crew, helm, or boat masters. The volunteers show their commitment to the project with the training they do, and the time and service they provide to the public. Supporting those on the boat are a number of land-based volunteers involved in roles such as sales, marketing, publicity and crew rostering.

The John Bunyan boat has carried more than 45,000 passengers since it was launched, and the 2022 season is underway with charters and public cruises available to book.

The John Bunyan Community Boat is one of 244 local charities, social enterprises and voluntary groups to receive the prestigious award this year. Their work, along with others from across the UK, reminds us of all the ways in which fantastic volunteers are contributing to their local communities and working to make life better for those around them.

The Queen’s Award for Voluntary Service aims to recognise outstanding work by local volunteer groups to benefit their communities. It was created in 2002 to celebrate The Queen’s Golden Jubilee. Recipients are announced each year on 2nd June, the anniversary of The Queen’s Coronation. Award winners this year are wonderfully diverse. They include volunteer groups from across the UK, including: a rural support group for farmers in Shropshire; a community magazine addressing isolation in the Western Isles; a running club engaging all ages in County Tyrone; a film academy and community hub based in South Wales, and a food bank in Greater London feeding vulnerable individuals and providing training opportunities.

Representatives of The John Bunyan Community Boat will receive the award crystal and certificate from Helen Nellis, Lord-Lieutenant of Bedfordshire later this summer. In addition, two volunteers from The John Bunyan Community Boat will attend a garden party at Buckingham Palace in May 2023 (depending on restrictions at the time), along with other recipients of this year’s Award.

Graham Mabbutt, former Chair of the John Bunyan's Management Group says: “I was delighted to hear we’ve been awarded the Queen’s Award for Voluntary Service, which is a great recognition of the hard work of our volunteers, who work to run a wonderful boat service for the people of Bedford and surrounding area. I would like to personally congratulate the volunteers for all their work over the past few years which has led to the success of the John Bunyan boat”.