Women in STEM: how can we tackle the gender bias? 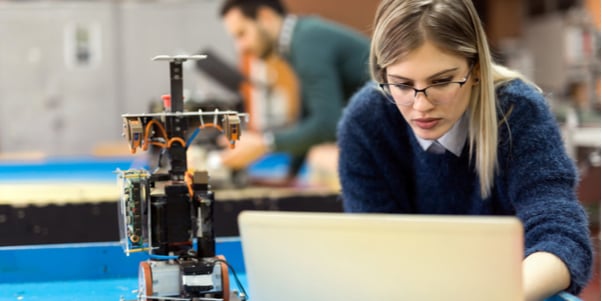 The number of women in STEM (Science, Technology, Engineering and Maths) has been disproportionately low for as long as records detail. Women make up just 12% of engineers and 26% of computing professionals. However, of scientists and engineers seeking employment, 50% are now female. And since 2016, there are now 12,000 more women professional engineers.

So how can we continue driving gender parity in STEM sectors so that the next generation can pursue their career aspirations, quash stereotypes, and lead the way for more female talent?

Stereotypes are perhaps one of the main reasons females avoid these sectors, and they are exposed to these stereotypes from a young age.

A study of 1,327 Swedish secondary school students explored why boys are attracted to STEM subjects at university while girls tended to steer towards HEED (health, elementary education and domestic). It concluded that social belongingness was a key factor in this disparity. Teens felt they ‘belonged’ in subjects that had more of their own gender.

Stereotype threat is another explanation for such gender disparity. Stereotype threat can arise when a negative stereotype inadvertently impacts performance. For example, the education ‘performance stereotype’ that ‘boys perform better at maths’ is one that many females can succumb to at a young age. This could be a contributing factor in why females avoid the subject - they have been programmed to believe they aren't as good at it.

This is particularly prevalent in STEM: a notoriously male dominant sector where women may grapple with imposter syndrome or lower confidence.

As much as we’d like to think we have reached a place of equality, and we certainly have made significant progress, there is still more to be done.

A popular BBC article tells of the experiences of a female CEO, who was told she would need to act “less young and less girly” if she wanted to succeed in business (exacerbating negative biases towards women in leadership).

Since then, she has broken stereotypes and boundaries, becoming CEO of a multi-million-pound global company at just 31, challenging and rejecting stereotypical traits of CEOs and embracing her own leadership style. As more and more women reject and break down the masculine stereotype of the typical CEO, we will (hopefully) start to see more women in the top spots.

If you think you’re not biased, take this online test to find out. Even the creator of the test (a female) showed implicit gender biases.

Modern life often leads females to crossroads where they face the impossible choice of career or motherhood. While women are fully entitled and supported to take a career break to start a family, many workplaces still struggle with supporting the return to work.

A loss of authority or purpose on returning to work is often preceded by inflexible working arrangements and rigid hours which mean it's virtually impossible for women to return to their roles as they were before they left.

This often leads females no choice but to take a step back in order to bridge the gap between motherhood, perhaps settling for a role with less responsibility, or seeing their career take a back-seat entirely.

Many workplaces implement meaningful parameters (e.g. keep in touch days), support networks and flexibility which can enable more women to manage the demands of parenthood while maintaining their purpose and contribution to the workplace.

What’s more, these arrangements can see men benefit too. Increased flexibility will enable more men to participate in care-taking and support roles, spending more time with their families and ultimately, being more present in the home. This helps to promote gender parity throughout the household as well as the workplace.

New research has identified that UK workers in STEM are at a loss when trying to name key role models in their industry. And the majority of female respondents (91%) think more should be done to promote female role models.

If you are a woman in engineering, science, tech or maths, now is the time to seek out opportunities to serve as a role model to young, aspiring female students.

The Chamber currently supports a bursary which aims to introduce more women into engineering by providing a financial supplement that sees the winner through university.

But, this is as much about retention as it is recruitment. If stereotype threats plague the STEM environments, it's unlikely they will be able to perform at their full potential, resulting in lower retention rates and ultimately, impacting the next generation of STEM talent.

So we are heading in the right direction to driving gender parity in the STEM domain, and tackling the mindset that it is predominantly the domain of men. Ultimately, this starts with visibility and education. We need to start looking at how we can encourage the next generation of both women and men into STEM related qualifications and studies. With increased visibility and awareness of STEM related roles and role models.