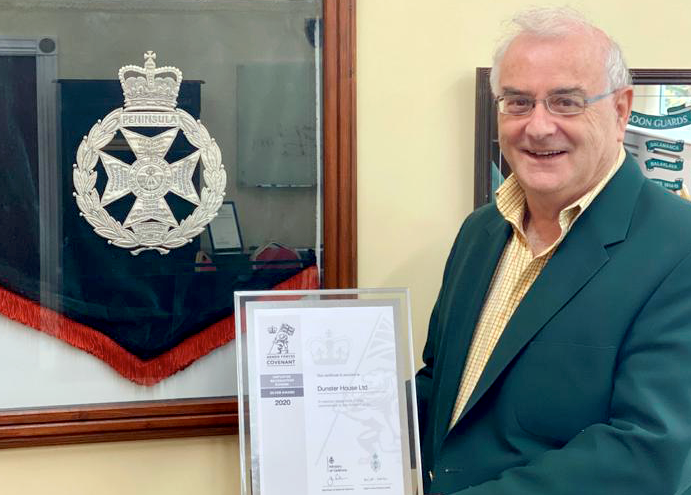 The Bedford-based company revalidates its Silver Award, which is part of the Defence Employer Recognition Scheme (ERS).

The English company has always worked to provide support and opportunities to ex-forces and has employed many former Service leavers, Veterans and Reservists over the years. Currently four out of six of its Branch Managers are ex forces, who joined Dunster House after leaving service.

A strong supporter of the Army values and ex-military man himself, Mr. Chris Murphy, has also recently embarked in a new adventure donating the 11-acre Penlan Farm to the charity Woody’s Lodge, that offers support for veterans and Emergency Services Leavers, and uses the land for its Green Green Grass of Home Project, which has been developed to organise outdoor activity programs that can act as catalysts to improve family relationships, and mental and physical health.

Dunster House Ltd.
Dunster House Ltd. has been established in the UK retail market since 1994, with sites in Bedford, Flixborough, Warminster, Faversham, Basingstoke and Liverpool and sister factories in three countries across Europe.
It is the UK’s largest Garden Building Company, one of the largest UK Timber Climbing Frame Companies and produces many other successful and diverse product lines. Seven years ago, Managing Director Chris Murphy decided to open a new Humanitarian department within Dunster House HQ, dedicated solely to finding solutions to humanitarian crisis using their expertise, resources and knowledge of design and manufacturing. Currently, Dunster House has become one of the leading manufacturers of sanitation equipment for national and international charities, being an official supplier of major NGO’s as Oxfam and Unicef.