Chamber member wins funding to support export ambitions in the US 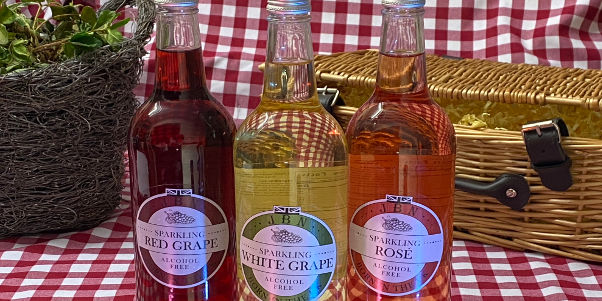 Bedfordshire-based company Theodore Global export non-alcoholic beverages to Utah in the US. The company is owned and run by Janet Theodore and her two daughters, Bethany and Nicola.

Theodore Global recently won some funding from Heathrow in a campaign to help Britain’s small businesses achieve their exporting ambitions. The campaign was run in partnership with the Department of Trade (DIT) ‘Exporting is GREAT’ campaign.

We spoke to Janet about Theodore Global’s exporting journey and commitment to ethical trading. We also spoke about plans for the future and how organisations like the Chamber and the DIT have supported them with their export ambitions.

Janet and her daughters have spent the last two years creating a range of sparkling grape drinks. The drinks are named JBN, which brings together the names of Janet, Bethany and Nicola.

“We’ve always enjoyed welcoming friends and family into our home and we often serve our favourite alcohol-free beverages. These drinks were such a key part of our family and home life and so we wanted to create our own beverages. Our American family in Utah are Latter-day Saints so don’t drink alcohol and we wanted something we could produce for them too."

To make sure they were targeting the right market, Theodore Global’s team, Richard Cooper and Katey Horne, went out to Utah and did all their market research and planning on the ground.

“Utah is a Mormon state and they don’t drink alcohol, so JBN was perfect for that market. We went out there and worked with Brigham Young University (BYU) who helped us with our research and data collection, and we also reached out to customers and stores. We were actually able to find customers fast, before we even produced the drink. Doing it this way round was quite challenging at times because it’s taken us a long while to get the drinks to them and you risk losing those customers. It’s taken us two years to get to where we are now.”

Of the actual exporting process itself, Janet says it was difficult at first because there was so much to learn and understand. They had to take time to really understand the process and legalities of exporting, including all the documentation involved, but were pleased to find there were organisations who could support and help them along the way.

“We were able to work with the FDA in both the UK and the States with regards to our ingredients and nutritional contents on the label. This took a few months to get right. We were told if we didn’t get the labelling and the documentation right then our stock would sit with border control unable to enter the US and we would have to pay storage costs. Organisations like Feast to Feast, who have lots of knowledge about labelling in the food and drink industry, were also able to review our label.”

“As an SME, finding support from the Chamber of Commerce, Anton our DIT advisor, and a business consultant, was a tremendous help. We also found support from our freight agent who has a wealth of information about shipping terms and the documentation process.”

Anton Rudgalvis is Export Growth Trade Adviser for the DIT, and worked with Janet and her team throughout the exporting process. Anton gives us some more insight into Theodore Global's journey to export:

“Firstly well done to Janet for winning the award! We have been working with Janet for some time giving help and advice on all aspects of international trade. Janet and her team were also able to access ERDF funding to assist with an overseas visit to the USA which enabled them to undertake on-site market research which really helped.”

“In addition, we have been able to signpost Janet to a number of our partners who have contributed towards her success. As the ex-MD of an SME, I know just how important it is to access outside help and support and this is where DIT can really help. I wish Janet every success as she continues her work in the overseas marketplace.”

Theodore Global pride themselves on being an ethical trading company, and by exporting their products to Utah, they also aim to support community projects in the local area.

“We find local projects in Salt Lake City and support them with part funding, donations, and also by spending time with the projects. One of the community project we hope to support is the Wish Foundation and Saint Jude. We try and work with different projects each year.”

Janet also runs a community interest company and for the last decade has been supporting projects in local communities within the UK.

“I also run a community interest company and for the last nine years we have been supporting different community projects in the UK, ranging from working with teen parents to children who are disadvantaged, and also gifted children. I wanted to keep that same thought and theme with this project too.”

“As a company and having a corporate responsibility, we wanted to direct some of our profits to projects in the community. It just seemed like the natural thing to do, to reach out to the community in Salt Lake City and support them.”

Janet talked about her plans for the recent funding they received from Heathrow and their campaign with the DIT.

“They were looking for businesses that were internationally exporting and looking at doing trade shows. The trade shows abroad are really expensive so we are really grateful for winning the award. We didn’t expect to win, it was a shock! But it’s great that the funding will help go towards exhibiting in the US this year.”

In the future, Janet hopes they can expand their JBN product range to introduce new flavours. And looking beyond Utah and the United States, they hope to be able to take their products to new markets, including the Middle East, Europe, and even at home in the UK.

Janet also hopes they can work with other companies in the non-alcoholic drinks industry, using their experience to support them in exporting their own products overseas.

“If you’re looking at exporting, the Chamber can really support you. They have a really good export plan in the department and they have been really, really good. It’s opened lots of doors for us, like being able to attend networking events and exporting courses. It’s great to have a network support like the Chamber behind us. And when you export to America, there’s a Chamber there as well. It’s been really nice to have meet the Chamber team in Salt Lake City too.”

We’re excited for Janet and her family as they continue to export overseas and grow their business. The export journey hasn’t always been easy, but the support from the Chamber and the DIT has really helped them along the way. And the funding from Heathrow has given them a boost to keep going.

For any SMEs considering exporting their products overseas, Janet offers this advice:

“My advice to other companies looking to export is to find out as much information as possible before you export. Attending courses and networking events are a great way to find out more information. The Chamber of Commerce is a good place to start as they can offer support and point you in the right direction.”