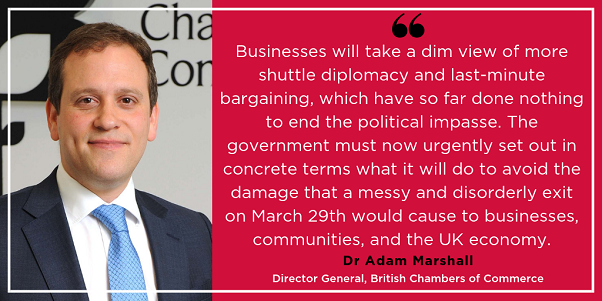 Responding to the Parliamentary defeat of the Meaningful Vote on the Brexit Withdrawal Agreement and Political Declaration, Dr Adam Marshall, Director General of the British Chambers of Commerce, said:

“There are no more words to describe the frustration, impatience, and growing anger amongst business after two and a half years on a high-stakes political rollercoaster ride that shows no sign of stopping. Basic questions on real-world operational issues remain unanswered, and firms now find themselves facing the unwelcome prospect of a messy and disorderly exit from the EU on March 29th.

“The overriding priority for both government and Parliament must now be to avoid the clear danger that a ‘no deal’ exit on the 29th of March would pose to businesses and communities across the UK. Every second that ticks by sees more businesses spending money on unwanted changes, activating contingency plans or battening down the hatches and halting investment, as they try to anticipate a future that is no clearer now than it was at the time of the referendum result.

“Businesses will take a dim view of more shuttle diplomacy and last-minute bargaining, which have so far done nothing to end the political impasse. The government must now urgently set out in concrete terms what it will do to avoid the damage that a messy and disorderly exit on March 29th would cause to businesses, communities, and the UK economy.”