Record-breaking 73,349 votes decide the nation’s favourite parks and show how much people #LoveParks.

This year, they awarded a record-breaking 1,799 Green Flag Awards to the best-managed parks and green spaces. To find the best of the best, they asked the public to vote for their favourite parks, which they did in record numbers. 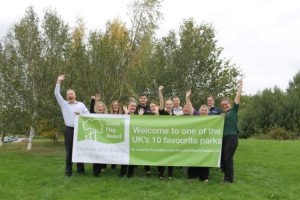 winners are spread across England, Scotland and Wales, including large and small sites, traditional parks and wild unusual spaces. Some of the winners are run by councils, others are managed by community groups and one is a university campus.

Head Ranger for the Park, Anna Charles said: “It’s an honour to be in the Top 10 Parks once, let alone 6 times in a row. A big thank you should go to our team of volunteers who help us maintain the Park with a staff team of only 2.5 rangers! And thank you to everyone who voted for us – we really appreciate it!”

The 2017 People’s Choice Award-winning parks (in alphabetical order) are: