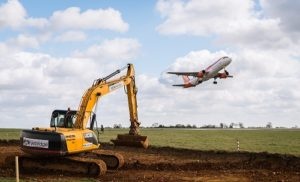 The work includes the creation of four new aircraft stands and the construction of a new taxiway extension, both of which will help the airport increase capacity and improve the efficiency of aircraft movements. Works are already underway, and are expected to be complete by the end of the year.

This project forms part of the largest single investment in the airport’s history to increase annual capacity by 50% to 18 million passengers by 2020. The transformation of the airport will deliver a bigger, better terminal and improved infrastructure which will make passengers’ journeys quicker and easier.

Ryebridge Director Daniel Coyle said: “We have enjoyed a strong relationship with LLA since our formatio 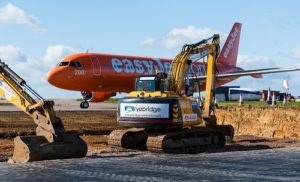 n 8 years ago, and are delighted to be part of this exciting project and the redevelopment of the airport. We have invested heavily in training and will use a local supply chain wherever possible to ensure this project will positively impact the lives and businesses of the local community”.

Independent economic analysis has found that LLA is an important economic driver for the local area. In 2013, the airport supported 15,000 local jobs, generating £732 million for the economy in the Three Counties region. LLA’s current expansion means that this is expected to increase to 22,000 jobs and £1.2 billion by 2030.

Ruari Maybank, LLA’s Construction Director said: “The appointment of Ryebridge for this important work is just one example of LLA’s commitment to supporting local businesses – around one third of our suppliers come from a 30-mile radius. As the airport grows, we want to make sure that the community shares in our success, and supporting local jobs is an important part of that”.