The Government has announced road investment plans including some improvements that the Chamber has lobbied for with partners.

A1 Black Cat Roundabout:  Substantial queuing is experienced on the northbound and southbound A1 and the A421 approaches to the Black Cat roundabout.  To reduce this, the scheme will increase the size of the roundabout to accommodate four lanes. Estimated start date: May 2014. Estimated completion date:November 2014 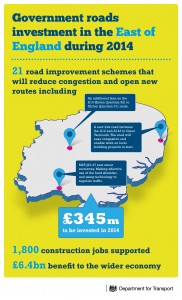