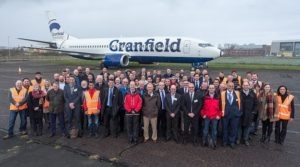 Since 1977, Cranfield University has established itself as a centre of excellence for aircraft accident investigation, receiving the Queen’s Anniversary Prize in 2011 for its work in the field.

Over the last 40 years, more than one thousand investigators have been trained by the University using a unique combination of academic instruction, practical simulations and the experience of investigation professionals.

Today, the Centre consists of 12 academic staff with a focus that has widened to include all aspects of multi-modal safety and accident investigation including: safety management; flight data; human factors; unmanned aerial systems; and airworthiness.

Professor Graham Braithwaite, Director of Transport Systems at Cranfield University, said: “It was fantastic to see so many familiar faces returning to Cranfield and, where for many, their careers in accident investigation took off. As well as a chance to reminisce, it was also an opportunity to hear from industry leaders and to find about about how technology such as laser site scanning, computer modelling and drones are changing accident investigation.”