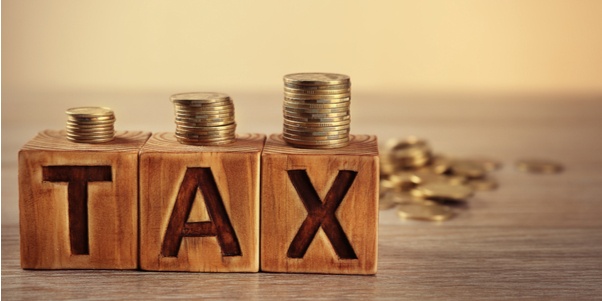 The vast majority of UK businesses believe the cost of complying with the UK tax system has escalated over recent years, according to new research released today by the British Chambers of Commerce (BCC) in partnership with Avalara.

A survey by the BCC of over 1,100 firms from across the UK found that three in four (75%) believe the overall burden of tax administration and compliance – the HMRC equivalent of ‘red tape’ – has increased compared to five years ago.

The escalating time and resources necessary to comply with the UK’s tax system reflects the need for action from government ministers and HMRC to reverse the burden and complexity of administration, and for more support from HMRC for firms trying to stay compliant.

The results of the survey show that two-thirds (64%) of businesses say that VAT creates the biggest administration and compliance burden, a finding mirrored in the responses of firms of all sizes and sectors. Businesses continue to report confusion over the vast array of rules and rates, suggesting that ministers’ focus should be on reducing the complexity of VAT administration to help boost firms’ growth – rather than tinkering with the VAT threshold. 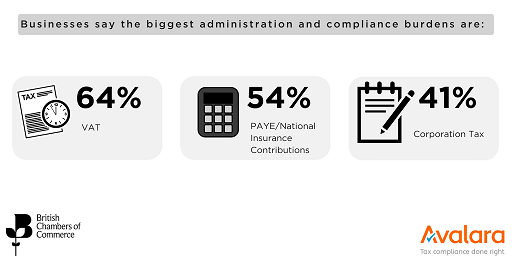 On top of that, businesses are facing further demands on their time and money to be ready for the introduction of the government’s Making Tax Digital project, which the BCC has called upon ministers to delay until the start of the 2020/21 financial year*. At the same time, companies remain unclear about how the VAT system will function when the UK leaves the EU.

While the BCC continues to support the government’s attempts to tackle the aggressive tax avoidance by a small minority of firms, our research shows that there is also a real need to lower compliance costs, transaction costs, and complexity of tax for business. The BCC therefore calls for investment in HMRC’s work on tax evasion to be matched by investment in support for businesses to make compliance easier and improving the processes for collecting tax. There should also be greater independent oversight of all new tax proposals to assess the potential administrative burdens on SMEs.

“Companies now routinely cite tax administration and compliance, rather than regulation, as their biggest single source of administrative headaches.

“If the government wants its ‘Global Britain’ vision to become a reality, it is time to tackle the huge costs and complexities of the UK tax system, which sap away time and resources that could be better spent raising business productivity and growth.

“HMRC must be given both resources and a clear remit to focus more on supporting, rather than pursuing and punishing, small and medium-sized firms, as they work to get tax right. We want to see more investment in frontline HMRC support that’s geared towards making compliance easier for SMEs. There should also be greater independent scrutiny of new tax proposals with the aim of minimising the administrative burden on business. Making tax administration simpler would provide businesses with more time and headroom to focus on investment and growth.”

“The UK’s VAT Gap, the amount of VAT collected annually versus expected, has remained stubbornly high at £12 billion. As a result, HMRC is stepping up investigations and pushing forward VAT as the first tax in the Making Tax Digital initiative. This new requirement, to record and report digitally, will affect the smallest businesses most – approximately 500,000 still use non-compliant spreadsheets or manual recording. These enterprises will have to invest in compliant software, and become familiar with its processes. HMRC’s MTD is being replicated across Europe, with countries like Spain, Italy and Hungary one step ahead of the UK, requiring live sales invoice submissions to tax authorities.”