Nearly two-thirds (63%) of the senior businesspeople polled in a major new British Chambers of Commerce survey have revealed that the outcome of the Prime Minister’s renegotiation is unlikely to change how they will vote - despite large majorities saying they are familiar with the objectives of the renegotiation package.

On the eve of crunch Brussels talks expected to result in a deal, the findings from the leading business group demonstrate that the renegotiation process is having little effect on business opinion.

The BCC’s previous survey on Europe, which took place in September 2015 before the renegotiation process began, found that half (50%) of those surveyed would reconsider their voting intentions based on the package of reforms secured by the Prime Minister. The latest survey of over 2,000 senior business leaders was conducted in January 2016 with renegotiation in full swing (before the Tusk draft deal was published) — and saw this percentage decrease to 34%. The BCC’s detailed findings suggest that it is now the referendum itself that is important to businesspeople, rather than any package of reforms secured.

The BCC’s data on voting intentions shows a business community divided based on size and export interests. Those representing large firms are significantly more likely to vote ‘Remain’ than those in small and micro-businesses. Firms’ international orientation is also a major factor, with opinion varying based on whether and where firms export.

Commenting on the results, John Longworth, Director General of the British Chambers of Commerce (BCC) said:

“When we last surveyed Chamber members in September, we did not know the detail or ambition of the Prime Minister’s renegotiation package. Now our findings suggest that the renegotiation is having little impact on day-to-day business — or the vote of the BCC's business community, since many made up their minds before knowing the outcome of negotiations, effectively discounting them as irrelevant.

“Our findings suggest that for businesspeople, this is a question of in or out — not renegotiation. Business remains divided on Europe, and business leaders’ views reflect the size of their firm and their export interests, rather than the current political debate. They are making rational economic choices based on their own interests.

“Our findings are a wake-up call for both the Remain and Leave camps. Neither side can bank on a change to business opinion in the wake of any renegotiation settlement.”

BUSINESS KNOWLEDGE
• Only 7.9% of business leaders said the EU referendum was ‘not at all important’ to their business, compared with 43.3% who said it was ‘very important’
• Businesspeople are highly exposed to the EU referendum debate, with 66% (up from 51% in September 2015) reading about it at least weekly, and a further 22% every fortnight
• The majority of business leaders say they are familiar with every objective in the Prime Minister’s renegotiation package: safeguards for non-Euro countries (68%); boosting competitiveness (64%); UK exemption from ever-closer union (70%); and restricting EU migrants’ access to tax credits (81%)

BUSINESS IMPACTS
• Over eight in 10 business leaders report that the referendum has had no material impacts on orders/sales, recruitment, investment or costs in their business to date.
• If the UK were to leave the EU, 39% currently expect this would have a negative impact on their overall growth strategy (largely unchanged from the last survey); 36% feel it would have no impact (down from 40%), and 17% believe it would have a positive impact (up from 14%)

VOTING INTENTIONS
• 60% - a majority – of business leaders would vote to stay in the European Union should the vote take place tomorrow. 30% would vote to leave
• 12% say the PM’s renegotiation was ‘very likely’ to influence their vote; 22% ‘somewhat likely’; 63% ‘unlikely’  (up from 45% in September 2015) 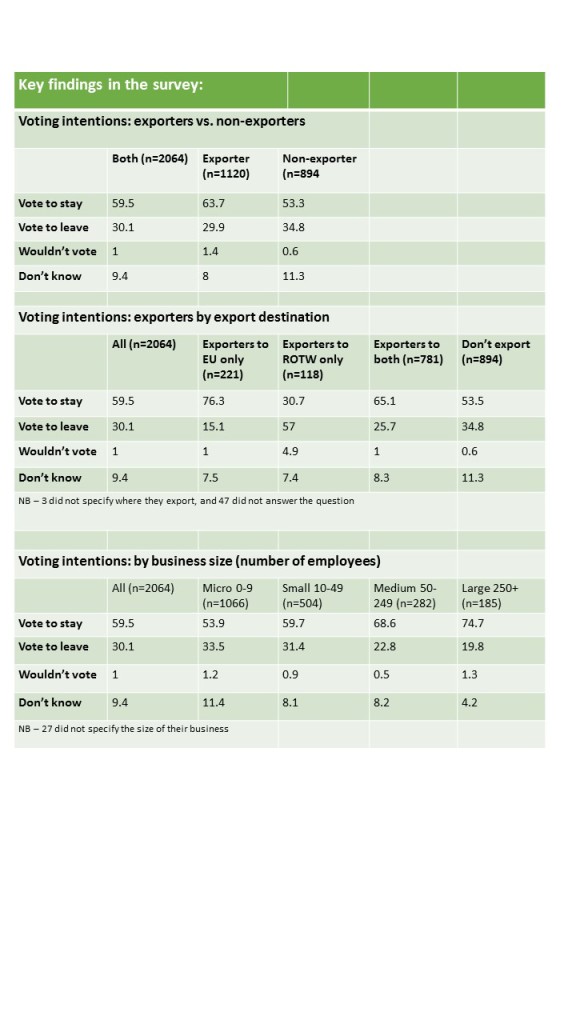